The Probate Papers is an ongoing story of several thousand tragic stories.  The development of each story is an investigative exposé in and of itself. Each characterized by document crimes, professionally coordinated undue influence of the frail, memory-impaired dependent and subverted court processes that legitimize criminality while granting immunity so perpetrators can repeat the process. Fraud rewarded is fraud repeated. This exposé is a dynamic project; alive, playing out in real-time though documentaries, nationwide news article curation, focus group summations, research advocacy, court process reform panels. monitors and painful victim accounts all poured into the ever-expanding virtual repository. The wide-net of information necessary to empirically demonstrate such a complex systemic and endemic societal catastrophe is assisted by data-journalist developed tech application’s, Geo-Intel maps, and AI crowd-sourcing scouts to support the narration of stolen lives & legacies.

“Like its predecessors, the Panama Papers and the Paradise Papers, the Probate Papers also involves serpentine estate planners and tax attorneys deviously transferring assets in a labyrinth of their own illicitly-drafted device, completely contrary to long-established plans, decency and law. Comparatively, in the whistle-blowing era of Assange and Snowden, European and American journalists exposed the wealthy, power-wielding elites laundering their treasure in Caribbean tax havens through dubious firms such as Mossack Fonseca and mysterious London shell-companies all ran by the same dead woman.”

Several journalists’ paid with their careers, freedom, forced to exile or were killed in those global investigations that continue to shake the foundations of power to this day. Glaring proof that authentic investigative journalists and whistle-blowers give all as truth’s martyrs. In this age of increasing wealth disparity and global corruption, they are societies unsung broken-souled saviors. The truth-torch they bore is passed to every-day citizens, regular people finding themselves unexpectedly thrust into betrayal and treachery liken to the lowest circles of Dante’s inferno.

While the tax-dodging law firms have, for the meantime gone omerta, an even more insidious estate-transferring breed has proliferated equivalent to the rapid growth in the aged, frail, asset-rich but memory-poor community. The aged will double in the next 20 years, coinciding with histories largest wealth-transfer that is currently underway. Not surprisingly, the latest in-vogue RICO scheme involves fate-changing provisions pushed by predatory pettifogger’s intentionally creating family dysfunction on the rigged battlefield of probate court where dubiously mutated boilerplate estate documents, cult-level-coercion, undue influence and the signature signing pen is mightier than the sword.

For those of you who have not yet crossed into the alighierian land of “All hope abandon, ye who enter here”, the following support articles are, only but a few to get familiar with and prepare you for what lies ahead for your parents and you.

The same Judge has biased council from aligned self-serving professionals, all whom have mutual interests to keep the cash-cow victim and their property under their authority in Guardianships and/or Conservatorships. This is a substantial and illicit conflict-of-interest—opposite of the Wards best interest. When those acting as officers for the court; lawyers, guardian ad litems, social workers/court visitors, evaluating clinicians & physicians work in-concert to conceal documents, evidence of abuse, exploitation & negligence — this essentially sabotages the machinery of justice; due process, amounts to perjury and each by definition, is a type of fraud upon the court.

OC Register: Money-draining probate system ‘like a plague on our senior citizens’

“…. often there is a little buddy-buddy system going on, sometimes a judge has friends who are attorneys,” said Thomas Coleman, a Palm Springs lawyer who specializes in representing the disabled.”

A Central Theme of the Probate Papers Exposé Delves Into the Inter-relationship of Entrenched Professional Corruption, Elder Exploitation and Undue Influence.

“Psychologist Margaret Singer was one of the first researchers to connect elder abuse to undue influence, which she defined as “(w)hen people use their role and power to exploit the trust, dependency, and fear of others. They use this power to deceptively gain control over the decision making of the second person.”The psychological tactics of undue influence have been likened to tactics used by cults, ….” National Center on Law & Elder Rights: The Impact of Undue Influence

The initial Probate Papers feature article addresses how some county probate courts are compromised by compounding conflicts-of-interest among the probate court professionals and their network of third party professionals. The majority of organized professional exploitation rackets target the elderly and handicapped, particularly physically and memory challenged elderly women in their late seventies, eighties and nineties. More often than not, these seniors or vulnerable persons have substantial assets. The municipal court’s crony-aligned network of litigation incentivized professionals all receive hundreds of dollars in hourly fees from the same vulnerable elderly woman’s estates; these are their own clients, the same naive and helpless victims they are exploiting, The latest Department of Justice’s Elder Justice Initiative (EJI) statistics compiled mainly from Adult Protective Services confirms this: most often the victims of elder exploitation are disabled elderly women.

Many in the country are now becoming aware, not all victims are elderly disabled women. The courts professional predator rackets also target young, successful women as well as aged and young men in the prime of their life and career. Even judges and attorneys have been caught in the probate pipeline. For this reason every person in the United States needs to carefully assess whom they can really trust, this includes parents, children, spouses, friends, doctors while being especially wary of attorneys whom are fluent in the tricks of the trade of Guardianship and Conservatorship law, confidence what they can get away with if they have developed a thieving support network and relationship with the local probate judges. In many counties the pros have a playbook and a well run network of assisting professionals in key strategic positions each share the same financial aspiration; to take what they can from the vulnerable and transfer to those who can mutually help them expand the digits in their bank accounts.

The pros know that accurate allegations of RICO and undue influence are viewed by the magistrates as merely myths uttered by disgruntled victims. These types of professionals welcome and encourage litigation; in fact its understood their abuse and exploitation are the catalysts for litigation as a means to increase billable hours. That is in the playbook. These predators know they are the courts preferred party, granted impunity by the black-robed bench referees. These devourers of innocent souls are the home team, court-darlings whom entertain the magistrate with their crafty gamesmanship as the victims true advocates cry foul, citing exploitation of the most heinous nature. With the power of Gods they walk in stride with the Judge—omnipotent, in complete authority granted by scrivenership of their own making in those dubiously signed life-controlling probate papers.

“In local courts across the country — often woefully unfit for the sweeping power they command — guardians, lawyers, and expert witnesses appear frequently before the same judges in an established network of overlapping financial and professional interests. They are often paid from the estate of the person whose freedom is on the line, creating powerful incentives to form guardianships and keep them in place.”

“The judge knows the lawyers, the lawyers know each other,” said J. Ronald Denman, a former state prosecutor and Florida lawyer who has contested dozens of guardianships over the past decade. “The amount of abuse is crazy. You’re going against a rigged system.”

“Potential conflicts of interest radiate through guardianship cases, a Seattle Times investigation has found.”,….. “Judges and court commissioners across the state have sealed the entire file in at least 398 guardianship cases since 1990, The Times found during its ongoing series investigating concealed court records. Most of the cases were sealed in King County.”

HuffPost: Is Elder Guardianship A New Form Of Human Trafficking?

“The victims are seniors. The partners in crime are financial predators and agents of the Elder Guardianship system — attorneys, professional guardians, medical experts, and others who are paid out of the senior’s assets. There are some good judges but many are overworked and some are actively aiding the exploitation. Anyone can file to deem you incapacitated. The entire process from filing an incapacity petition to plenary guardianship where all rights are removed can happen within days. Yet, once you’re caught in the web, it’s almost impossible to break free… AND you are forced to pay your abusers in the process.​” 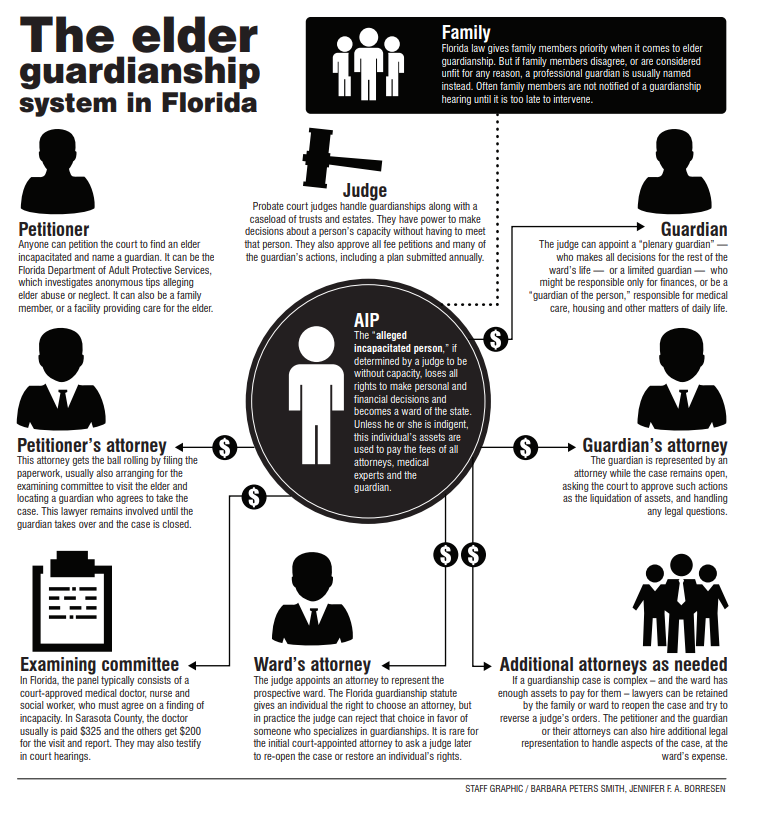 Data curation for this Expose is unique because this is also a large scale data-journalism project that combines Geographic Information System (GIS) technology to plot regional reference points with Federal & State statutory code and many other regulations. Each tacked or pinned article/story is an event to be be cross-referenced for repeating-pattern trend analysis with other events and predatory behaviors. The volunteer programmers and analysts who modified existing tech in this open source system combine news articles and crowd-sourced social media events with updated laws and various professional and occupational ethic guidelines as a means to compare repeating regional violations that have been publicly published online. The central focus is news relevant to public safety matters concerning white-collar crimes. This data aggregating system is constantly updated in near real time with the verifiable voice of victims, elder justice advocates, citizen journalists, bloggers, independent reporters and cooperate media. This voice is is empirical, rarely opinion and includes court documents, videos and documentaries. In this sense, this is on-going evidence-supported journey telling a nations story as it occurs; confessing its darkest secrets. Clandestine crimes against the innocent and helpless committed by the unconscionable and narrated by those willing to expose the unspeakable crimes of vulnerable person exploitation—atrocities committed by those professionals and institutions whose sworn duty was to protect the infirm and aged, not trick them with deviously drafted documents they don’t understand, rob them, drug them, traffic them, orchestrate their misery and hasten their premature demise.

FIGURE 3: Like FIGURE 1 above the iframed portal insert below is a central feature curating articles state-by-state nation wide in a GIS Geo-intel trend analysis system navigable by both regional locations and phased topics to help victims, family, researchers, policy makers,legislative reps and journalist grasp the step-by-step process of elder human trafficking, the professional predators, their playbook, the collapse of the America Justice system by the greed of the professional whose duty was to hold the judicial branches integrity intact, and the enormous scope of elder abuse, exploitation, trafficking and extermination.